I’d be lying if I said Bordain’s original show "No Reservations" was not heavily influential to me during my own travel experiences, especially when starting out. I’m excited to see Anthony Bourdain’s move to CNN, a network more appropriate to an authentic travel experience than his former home. The new show (Parts Unknown), or at least the episodes I’ve seen thus far are excellent TV and represent a good watermark for us to strive for in our own unique way, with our own unique show “Raw Travel”.

The fact that Mr. Bourdain includes an underground rock band in Myanmar, or features LA’s Koreatown (once on our own rundowns for Season 1) and Colombia (2 of our already produced episodes for Season 1), doesn’t bother me, it encourages me me as validation we’re on the right track creatively and I think “Parts Unknown” success will only help us as gain traction during our 1st season.

If you haven’t caught “Parts Unknown” on CNN yet, you should. And if you are still wondering if authentic travel has a place on U.S. television screens, this ought to put any of those doubts to rest.

Anthony Bourdain Parts Unknown, CNN’s new weekend series airing at 9:00p.m. ET on Sundays again topped all cable news time period competition among adults 25-54 in its latest outing, and was also the top cable news program on Sunday. The April 21 episode delivered 470,000 adults 25-54, up 67% vs. its premiere week and more than double the deliveries of its cable news competitors Fox News Channel and MSNBC (208,000 and 187,000 respectively). Bourdain also had a strong week among total viewers (974,000), up 30% vs. its premiere week performance (747,000).
In Sunday’s episode, Bourdain explored the Koreatown section of Los Angeles and spotlighted the talents and food preferences of award-winning chef Roy Choi and acclaimed graffiti artist, painter, portraitist David Choe.

On the digital front, Anthony Bourdain Parts Unknown has received more than 1 million page views in its first two weeks on CNN.com. (Source: Adobe Analytics) On social media, the premiere received 9,000 social mentions, up from last year’s 2,000 mentions for the No Reservations premiere on the Travel Channel. Three posts about Parts Unknown on CNN’s Facebook fan page received over 70,000 combined actions and were the top posts on the account for each Sunday.
See the full article HERE.
Posted by DontDragMeDown at 4:54 PM No comments: Links to this post

Why Sports $ is killng the TV Business?

Tired of $150 cable bills for programming that holds little appeal and generally goes unwatched? Me too. I mean is it me or has HBO gotten progressively worse over the past 3 years or so? Their movie titles are horrid and the originals are laughable. "Real Time with Bill Mahr" and "Real Sports" are the only reasons I subscribe.

And Showtime? Don't get me started, their originals scream "look at me! I'm so weird and cool!" and in reality, they are just loud, obnoxious and so very un-cool, just plain not good. . I tried to watch and really wanted to like something on there.. Californication.. Shameless.. some other garbage.. but it's just all garbage. I gave up all together.   But HBO & Showtime (and Honey Boo-Boo) aside, they have little to do with why your bill is so high. 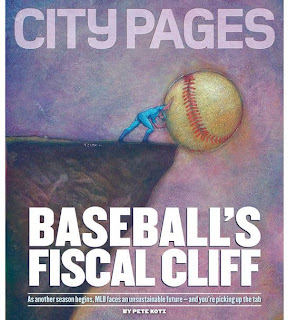 This recent syndicated article in the various alternative weekly papers did as good of job as any explaining how exorbitant sports rights are driving up the cost of even the most basic cable package, even as more and more people are "cutting the chord" and networks and cable systems alike are getting more and more desperate at trying to capture and keep elusive viewers.

The result, a sports win at all cost culture that some say, and I tend to agree, is out of control and a fragmented media environment that is courser, cruder, crasser and more expensive than ever. Something will have to give sooner or later.. and I think it's going to be sooner.

HERE is a link to the excellent article. Check it out.
Posted by DontDragMeDown at 11:48 PM No comments: Links to this post