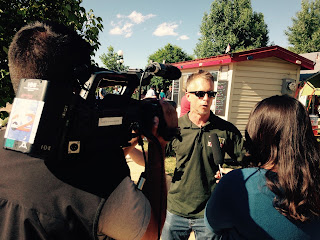 I very easily could have been on their morning show to chat up Raw Travel, as I've done in so many cities on so many morning shows. Ironically they were filming a segment on local tourism.

I don't wish to add to the cacophony of opinion of "what is wrong" with our country except to say this.. If you think travel to other countries is dangerous.. consider this..

I lived in Colombia in 2011 and was struck by the # of Colombians, who'd commented to me how they perceived the U.S. a dangerous, violent nation. They would tick off the growing litany of high profile and mass shootings as examples of why they feared travel to the U.S. Many said stated they preferred go elsewhere or stay home... in Colombia.. where things are safer.

http://www.nytimes.com/2015/08/27/opinion/when-the-tragedy-youre-covering-is-your-own.html?emc=eta1&_r=0
Posted by DontDragMeDown at 10:22 AM No comments: Links to this post