Welcome to Florida.. Now Give Me Your Money!!!! 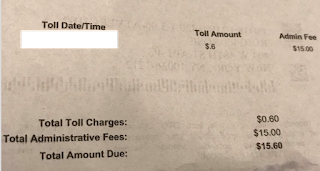 I recently had a 60 cent cashless only toll turn into a $15.60 bill because of Thrifty Car Rental and the State of Florida's super sneaky and shady "Gotcha!" toll system which allows Miami Airport Rental Car Companies like Thrifty to charge $15 a day in "toll admin fees" after the fact. I was there less than 24 hours, hardly went anywhere, used GPS to avoid toll roads, but no matter... If they play you just right, the fees they "earn" from tolls from unsuspecting visitors is actually more than the car rental itself. How much $ does this contribute to the rental car co's bottom lines? How many people go to the energy and trouble to fight a $15 charge, no matter how ridiculous?
New York State was recently outed for charging out of state EZ pass holders the cash fare, punishing them because they were from out of state, even though they had an EZ Pass.
This dishonest behavior and complicity by our government appointed authorities reminds me of another example. This one in Mexico, a third world country with a transparently corrupt government and correspondingly inept tourism authority where they advertise rental cars as low as $6 a day without conveniently mentioning insurance at $100 a day or more is REQUIRED by law. No insurance, no car. You find that out at the rental car counter, usually in the middle of nowhere. GOTCHA!
Travelers should not be treated as cargo or human ATMs. Governments and Companies that treat them as such, risk backlash (i.e. the airline industry's latest PR fiascos since they were allowed to merge) and worse. I think much of the rage we are seeing these days is a result of a series of small but more and more frequent injustices taking it's toll (no pun intended) on a seemingly helpless public.
Since the New York & Florida Dept. Of Transportations, Dept of Tourisms & partner rental car companies don't respect their visitors, maybe there are just too many folks visiting the state of Florida and New York spending too much $ and taxing their overcrowded highway system, thus they treat visitors like an ATM instead of with respect. Perhaps travelers should consider going to other nearby destinations. I hear the beaches in South Alabama, Georgia and the Carolinas are kind of cool....and that the Catskills are overrated.
Here is a great article on Florida's "Gotcha" toll System.
http://milestomemories.boardingarea.com/rental-car-tolls-florida/
Posted by DontDragMeDown at 8:29 AM No comments: Links to this post

HAPPY INDEPENDENCE DAY USA: - I'm thankful for the unfettered opportunity to present our truthful travel and world experiences directly to our audience, free of government (or corporate) censorship, interference or fear of reprisal.
This simple but powerful right is still not enjoyed by too many in the world. May we always remember it, and not take it for granted and/or abuse it by presenting exaggerated, inflated, misleading or manipulated information to support a pre-judged position for the sake of money, power or influence.
May we always recognize, that each of us, by our very nature of being human, see things through a prism of beliefs and attitudes already embedded by our unique education, experiences, upbringing and exposure to information.
May we always seek to continue to evolve and grow based on new information and knowledge that travel brings and understand that we are all "works in progress" and deserve each other's honest but respectful dialogue, regardless of whether we agree with someone at any given moment in time.
May I judge less and love more and understand that life is a short but powerful gift that should not be squandered.
Travel safe (but not TOO safe) out there and Happy Independence Day everyone!
Rob 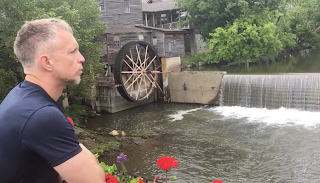 Posted by DontDragMeDown at 10:40 AM No comments: Links to this post