Don’t look now, but there are more US homes without TV sets than ever before.

It’s an historic reversal of trend — something like the birds flying north for the winter — but Nielsen yesterday reported that the number of TV households fell by 500,000. 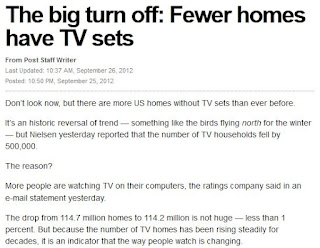 More people are watching TV on their computers, the ratings company said in an e-mail statement yesterday.

Read the rest of the NY Post article HERE.

Here is my little 2 cents for what it's worth. Consider the source, Nielsen Media Research, the company accused of accepting bribes in India, the company that has shown time and time again they can't be trusted to provide objective, accurate information, regardless of how many billions of $s are riding on it.

I have no doubt that fewer people may be buying TVs and are watching their entertainment online. My interns are in the early 20's and don't own a TV. They've never heard of "Modern Family", "60 Minutes" or "Real Time With Bill Mahr", but then again, they are from Moscow, Russia.

Yet, I know intuitively people are watching more and more online and less and less on TV. But I'm going to need more proof than Nielsen Media Research before I accept anything as fact.

Posted by DontDragMeDown at 11:48 PM No comments: Links to this post

Television Killed Itself: The Rise of Pointless Television

One of the best critiques on the frustration millions feel about TV today I've ever read.

Television Killed Itself: The Rise of Pointless Television
Posted by DontDragMeDown at 8:09 PM No comments: Links to this post

You Tube to review "Innocence of Muslims" Video


Mixed feelings on this one. I don't want freedom of speech compromised because of the feelings of some in other parts of the world, many of whom have access to limited information and thus a limited view of the world. That being said, You Tube is a private company and censors content all the time for a variety of reasons. Of course the film is extremely distasteful, but so are many, many things posted on the web. Unfortunately, people are disrespectful and hurtful all the time, especially on the web where they hide behind their keyboard.

I'd prefer the cultures in these countries take a more tolerant view and accept freedom of speech, religion and tolerate other viewpoints, but will that happen overnight?

This incident could be an important watermark of dialogue between East & West. Either way I'll guarantee you this type of thing will happen more and more as people have realized it's manipulative power for their particular cause, which is sowing discord. Has there ever been a film lampooning Buddha? or God? Why didn't that spark violence? Maybe, if it happens again and again, it will eventually lose it's potency. Maybe the answer is more, not less? Just a crazy (and I suppose a potentially deadly?) thought.

The article from Broadcasting & Cable is below.

Posted by DontDragMeDown at 12:18 PM No comments: Links to this post

I'm heading to France next month, Cannes and Paris. Not my typical off the beaten path trip, that's for sure. After visiting so called "dodgy" places in Latin America and Eastern Europe, you'd think Western Europe would be cake right?

Not so fast. See the following article regarding a French fashion journalist bitch slapping a total stranger because couldn't find her and her 2 friends front row seats fast enough to a fashion show. After placing the slap, she even bragged about it to the NY Post, admitting that she told her victim "Now you know you don't F__K with French People" wow! uhmmm.. Hmmm. Maybe Colombia isn't so dangerous after all.

FROM NY POST - PAGE 6 9/13/12
The French journalist who smacked a fashion publicist at a Zac Posen show has been slapped herself, with a $1 million lawsuit. HL Group co-founder Lynn Tesoro’s suit says the incident happened at Avery Fisher Hall Sunday when she was set upon by Jalouse magazine editor Jennifer Eymere, her sister Vanessa Bellugeon and her mom, Jalou Publishing head Marie-Jose Susskind-Jalou. The trio was très offended when Tesoro wasn’t able to immediately find them seats for the show because fire marshals removed 60 coveted chairs. A witness tells Page Six: “Lynn Tesoro was trying to help the French women find a seat, explaining there were no seats available on the front row, but one of the ladies seemed very angry and was being really mean to her. Suddenly, one of the French women sharply slapped Lynn in the face and stormed off. Lynn seemed in shock, but she was very elegant about it and kept her composure. Nobody could believe it had a happened.” The suit doesn’t identify the slapper, but charges the trio with “assault, battery, intentional infliction of emotional distress, slander and/or libel.” In an interview with WWD, Eymere said she was the slapper. “I said, ‘Be careful, I am going to slap you,’ and she kept doing it,” Eymere recounted. “I didn’t hurt her. It was just to humiliate her. She humiliated my mom and I humiliated her in front of her crew. Voilà. I just said at the end, ‘Now you know you don’t f**k with French people.’” When Page Six reached Eymere yesterday about the incident, she said “I can’t comment, I don’t want to talk about it.” When asked about the lawsuit she added, “I don’t know about that.” A source said that after the slap, the mother and daughters left Posen’s show, meaning they missed the surprise appearance of Naomi Campbell, the ultimate model of anger management. Sources further tell Page Six that the French women have not been on any Fashion Week guest lists since the incident occurred.


Read more: http://www.nypost.com/p/pagesix/slapper_slapped_with_suit_PzK9D7iuF3yBx3FWxJrC5O#ixzz26PXDikvD
Posted by DontDragMeDown at 11:31 PM No comments: Links to this post