This Just In - "Experiences" In, "Stuff" Out

Just in time for Black Friday or Grey Thursday (the name given by the retailers who are so greedy/desperate that they are opening on Thanksgiving) if you prefer, comes some telling research from Ebates and Harris Interactive. 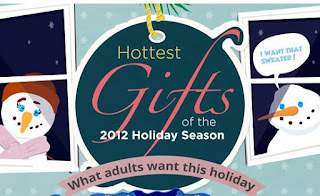 Americans are finally getting sick of "stuff" and looking instead for fulfilling experiences. Things like travel and vacations rank 2nd on the list and a full 57% of adults prefer experiential gifts this holiday season over the latest gadget or technology.

I for one think this is a good sign. Now if only somebody would let those clowns from "Grey Thursday" know this.

Ebates 2012 Holiday Wish List Survey of more than two-thousand adults conducted online by Harris Interactive discovered that among those that had a preference, clothing was the number one most-wanted gift this holiday (33%), followed by a vacation (28%). Rounding out the top ten most-wanted gifts by adults are: Laptop (20%), Tablet (18%), Smartphone (17%), Jewelry (17%), Homemade Gift (16%), Spa Day (16%), Tickets to a sporting event (13%) and latest E-reader (8%).

SEE THE REST OF THE ARTICLE HERE.
Posted by DontDragMeDown at 11:58 AM No comments: Links to this post

Cable TV Does Something Good? For a Change. 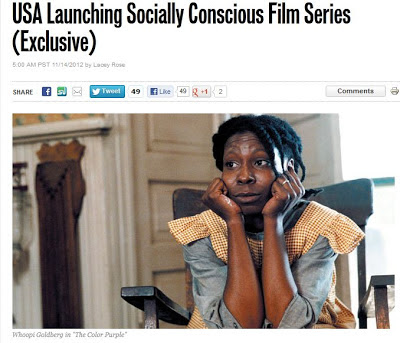 Maybe it's all the chord cutting going on but the cable TV industry may FINALLY be STARTING to get the message that we don't want 500 channels all showing the same programming night after night. If I hear the words "character driven reality show" featuring "over the top characters" or some jibber jabber which in so many words mean, "we want a show like the Kardashians, or Duck Dyanasty, or Honey Boo Boo or Fill in the GD Blank "Wars", bla, bla,bla" from another programming executive at a cable network, I may lose it and have to type a blog entry about it. Too late.

How many state troopers in Alaska, Gold Diggers in Africa, Rednecks in Tennessee or shallow people in California are we supposed to watch before we lose interest in the whole of cable TV in general.

Pretty soon these networks and their jelly kneed production "partners" will run out of crazy or sad characters to exploit or existing shows & genres to copy. Having run out of fresh ideas for low budget non fiction shows long ago, they are now cloning shows by focusing on different regions of the country, like "Texas Pawn Brokers" or "New Jersey Storage Wars", or whatever the latest Amish, hillbilly, backwards or truly damaged cast of characters they can find in whatever corner of the globe they can get to. Not that some of these shows aren't good or worthy, it's just that we don't need them all the time from every channel. That's a lot of wasted creativity and potential for diverse voices and choices, and yes for the next hit.

Instead we're stuck in an endless cycle of retreads.

I grew up surrounded by REAL hillbillies and rednecks who went "handfishing" or had kids like Honey Boo Boo. Why in the hell would I want to be reminded of that on a nightly basis?  Just like folks in New Jersey don't want to be reminded of the fools that made up Jersey Shore or the real business folks who, like me, hope to God that there is nothing actually "real" about the new Bravo Show "Silicone Valley".  I could barely keep my dinner down watching that one.

One or two culture shock, fish out of water shows, I get it.. but hundreds of them.. the same show on whatever network it happens to land on whether it be Weather, History, Travel or the Military channel. The shows are the same, the networks are the same and the concepts the same. I'm beginning to wonder if the people in charge are also all the same. Would that be media consolidation?

It's frustrating. But when I get my cable bill for $150 each month trust me when I say it gets more frustrating. I watch half a dozen shows regularly at best. Why am I paying $150 a month for Texas Storage Wars and Atlanta Tiddliewinks Wives or whatever this garbage they are peddling these days.

Could a supposedly "creative" industry be any less so?

And don't give me that parrot answer (lets face it "Character Driven Reality" is just a term some guy with brains once said at a conference and since then it's parrotted over and over and over to hide the fact that that old Hollywood saying "nobody knows nothing" has never been more true), that they are just producing what the viewers want. Bullshit.

What they are doing is loading up on the same type of programming that has seen one or two successes on another network or on their own network in another time slot and hoping that lightening will strike twice. This isn't a programming strategy as much as just playing the lottery.

Cable TV in the U.S. has become not only a race to the bottom but so formulaic that any simpleton viewer can figure it out. Non Fiction TV production is no longer an art, it's a factory.

"Has always been thus" you say? Maybe so and maybe I'm just getting grumpy but I'm hardly alone. When I used to say I work in Television it was with a bit of pride. Now I mumble something about "media" or "marketing" and hope they don't ask too many questions or they may figure out I actually work in "television". If TV is mentioned, well then it's off to the races as they complain and bitch just as much as I am doing right now. And not just a few friends in the industry mind you. The whole damn lot of people I come in contact with and anyone who knows me will atest to the fact that I have a diverse group of folks from a broad variety of backgrounds I interact with on a pretty regular basis. What can I say, I'm a people person. They intrigue me.

If only TV did.

At least in the good old days with less outlets there was less garbage to wade through.

Well one network, one of the grandads of all the cable networks no less, USA, has signaled that maybe, just maybe, the tide is beginning to turn. They've decided to use their Saturday nights to feature programming that has meaning, that actually is meant to be entertaining and have a message.

Granted Saturday night is the typically weakest night of the week TV viewing, and granted their plans for running old movies like "The Color Purple" or "To Kill a Mockingbird" don't sound that earth shatteringly cutting edge or inventive.

And their social consciousness seems preoccupied with this nation's fixation with race and diversity rather than broader, more urgent global social ills such as crippling poverty, political injustice, a warming planet, etc, etc.

But it's something. And more important than what it is, it's what it is not. And that is not yet another "character driven reality" series. Who knows, maybe the other diversity problem in this country might get addressed eventually, the diversity of thought and creativity on the small (and getting smaller) screen.

You can read the Hollywood Reporter article about USA's plans for yourself HERE.