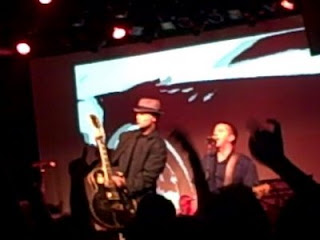 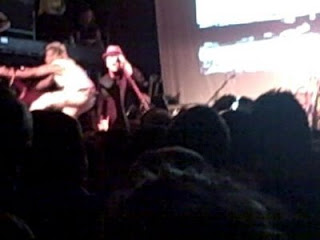 So I finally got to SEE one of, if not the hottest contemporary punk band of all time. With their mainstream "hits" drawing from reggae and ska influences, it was their deeper cuts, the pure punk short riffs that got me and the crowd so excited.. and it was an excited crowd. tickets could only be had by scalpers, as all 5 nights at the Fillmore aka Irving Plaza (or visa versa actually) completely sold out. I paid $60 for mine, but did not negotiate. I'm in a generous mood these days. Loaded up on a couple of rancid shirts as well. all in all, a $100 night and no date (rule of thumb for me, no date to punk shows).


Anyway, I digress.. Punk is not about the money, but damn, Tim Armstrong is a poster child of how to be a successful businessman and a bad ass punk rocker. His on stage persona is super cool, with an Elvis or dare I say, Mike Ness like sneer while showing his guitar chops.

His look was Ness inspired as well, with a rain coat and top hat laid low just above his eyes and a bandana underneath. But Armstrong bounces and moves, not just sneers and as a "lead" sits back and lets his bandmates show their chops and man do they have them. Rancid's bass player is the best I've ever seen. Rancid is tight, but in typical punk fashion, rowdy, raucous and they have things to say. With a new record coming out on my favorite label, Tim Armstrong's own Hellcat Records, I'll be buying that one and all the other songs I don't have in their catalog... All of them.

As I found last night, you have to dig DEEP to get Rancid's true depth. Punk legends in the making if not already there, Rancid fans are a mixture. I was expecting more high stepping, mohawk wearing, old school style street punks, but that was not the case. Lots of girls with guys (Saturday night so it WAS date night in NYC I guess?).. mostly 20 and 30 somethings but definitely it can be said the Rancid fans are not only rabid but diverse. Tim A. gave a shout out to the Operation Ivy fans and they responded... so there is some history there (if you consider 1980s history).

The young ladies next to me heralded from Queens, one was from Chile but of Indian descent. We chatted about some great Spanish rock acts but agreed, that in the U.S. bands like Rancid, they really are getting the young Latin rock fan these days.

Opening for Rancid was Murphy's Law, my 2nd time to see them and 2nd time in less than 2 weeks (see previous post on "The Germs" at Blender theater). I can't say enough about the show these guys put on. Their songs are catchy, and cool but its the on stage presence of Lead Singer Jimmy G. that makes the show. The cat is 43 and celebrating his birthday every day this year. He had his trademark Jaegermester to share with the crowd, defys his age every night by partying hard and he made a hell of very risky stage dive from the speakers high above the stage and just bellow the balcony. You can tell these guys are just happy to be playing. I really love these guys. Check them out on myspace or their website if you get a chance. I plan on buying a cd, maybe even a shirt, just in appreciation for what these guys have to say (i.e. "I love my country, but hate my government" EXACTLY!

It was a great night for Punk Rock and has been a great year for punk in NYC! My next stop is the Psychobilly and Rockabilly Showdown at the Knitting Factory in LA over Labor Day Weekend. Look for photos, videos and more coming to that soon.


Posted by DontDragMeDown at 11:04 AM No comments: Links to this post 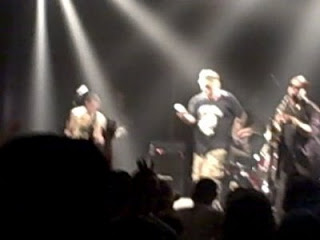 Blender Theatre on 23rd St. NYC was fairly packed last night as the Germs Return to NYC with a new young vocalist, Shane West, with actor looks but credible pipes.

LES STITCHES:
The event opened with Lower East Side (LES) Stitches playing to maybe a hundred folks spread throughout the Blender. I liked the Stitches and so did a group of young, punks / friends who made it their mission to not the low numbers or early hour disway them from keeping the pit a mosh of elbows and high step strut.

You can check out some video of their performance here:

Had never gotten a chance to see these guys and honestly, they were the highlight of the evening for me. NY Hardcore, also repping the lower East Side, vocalist Jimmy G. came out driking Yagermeister, shared generously with the crowd and then proceeded to smoke a joint, throw cans of bud to the crowd and taunt the observers in the back by referring to them as "meter maids" who he fucking hates!

The crowd onstage was almost bigger than the crowd offstage as their posse consisted of mostly 250lb tattooed bruisers and good old NYC blue collar punks. I like it. This is what Punk is about. NYC's answer to the LA Punk Scene is NY Hard Core. In the tradition of Agnostic Front and similar to Metal heads Madball.. but different, unique.. They have their own sound and they could care less about rules. It was raucous. how somebody didn't get their head split open with a budweiser beer can I'll never know.. they were flying all over the place. The pit floor was soaked, people were falling.. elbows were flying.. punks were punking OUT! It was a convention of misfits that would have made any true punker proud.. except there were just too few of them.. the crowd was there for the Germs.. but Murphy's Law stole the show. I'll check these guys out again.. and wear my worst punk gear.. cause your gonna get soaked AND INSULTED. Your also gonna hear some great guitar (Felpe I think?)

THE GERMS RETURN:
Mixing old with the young is The Germs. Pat Smear came out smoking his guitar and hasn't lost a beat. not a lot of energy from the guy but he can play. The music was fast, furious and the stage set was much slicker than Murphy's Law.. I mean they are legends, so I guess they deserve some trappings of success. The crowd was into them and it was a mix of young and old there as well. Shane West is the new lead singer and he looks too damn pretty to be a punk singer but its encouraging.. you don't HAVE to be a MESS to be into punk. It helps, but you don't have to be.

Check out some of their performance right here:

All in all, a good night for Punk Music in NYC.. do I smell a comeback?
Posted by DontDragMeDown at 11:20 AM No comments: Links to this post