WHY IS GREY MY FAVORITE COLOR? That REALLY strong opinion you espouse... could it be the seeds were planted by a foreign government bent on sowing discord here in the US?

That would mean we're being manipulated to argue and be divided politically, among friends, families, etc. by agents of foreign governments (with sadly, probably some help at home as well). Throw in the small % of people who run corporations that own most of the major national media & technology within the USA and you have a recipe for manipulation not seen since the days that most of the populace was illiterate and uneducated and ruled by Monarchs.

What to do?
QUESTION EVERYTHING - ESPECIALLY YOURSELF.

If you consider yourself a "conservative", maybe read a "liberal" newspaper like the NY Times or watch a liberal TV show on MSNBC sometime.

If a "liberal" watch Fox News or read the NY Post and see the other side. If a "moderate" do both WITH AN OPEN MIND.

STOP being railroaded into thinking a certain way just because you live in a certain geography or were “brought up” a certain way.

There's a reason they say you can't imprison the mind. Borders in the brain are self-imposed.

Think for yourself. Humans are imperfect but from Bangkok to Baghdad to Boston, most are good-hearted folks. Give your fellow human a break. Life is grey, it is not black and white. Which is why, grey is my favorite color.
Posted by DontDragMeDown at 10:21 PM No comments: Links to this post

Dividing people to gain money, power, market share, career advancement, etc. has consequences... and we, the ever pliable and naive public are paying the price.

Turning against our neighbors, fellow citizens and fellow human beings on demand and on command.

Cuba has a similar problem in miniature. Only there, neighbors turn against neighbors and spy for the government for an extra bag of rice for the month. At least they have hunger as an excuse.

Encouraging the dehumanization of others is dangerous. And media is powerful... especially in the early to mid-2000s when Mr. Ailes' grand experiment began to bear fruit and shape public discourse so powerfully.

This didn't happen suddenly or in a void. Actions, positive, negative and in between... ripple through time... decades and centuries after we leave the earthly realm.

May your ripples be lovely & kind ... not brutish & selfish.

No. I have not been drinking. Much.
Posted by DontDragMeDown at 11:01 AM No comments: Links to this post 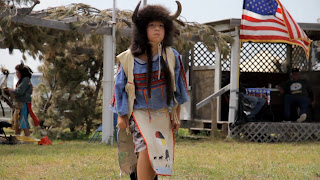 Mother Nature got you down? Yeah, she seems kind of angry.
Well, here is something uplifting. In 2016 we visited the Pine Ridge Native American Reservation in South Dakota, located in the poorest county in the USA where the avg. male life expectancy is 48. Let that sink in.
The famous Oglala Lakota Sioux Chief Crazy Horse predicted that the 7th generation would lead a resurgent comeback for his people. They are here and It is now happening with Lakota youth at the Red Cloud School (where 95% of graduates are accepted into college) leading the way.
Here is a link to a short, but inspiring photo essay.
https://www.theatlantic.com/photo/2017/08/a-reservation-restored/535656/#disqus_thread
Posted by DontDragMeDown at 10:55 AM No comments: Links to this post