Nielsen Media Research, the long unchallenged purveyor of television audience measurement, has been accused by a media company in India of taking bribes. What is not surprising to me is the allegation that the CEO knew about the alleged bribery and did nothing about it.

In 2006, we unveiled an educational and online petition signing campaign (somewhat pioneering at the time, as this was prior to Facebook and Twitter mania) called "Change The Sample" - later re-branded "Help Change TV" - that "outed" Nielsen's practice of tilting their already tiny Hispanic samples towards Spanish speakers, thus helping the big two Spanish language networks and Nielsen deep pocketed clients like Univision and Telemundo.

The impact was not just billions of dollars in the pockets of the Spanish TV companies but a general under or stereotypical representation of young American Latinos in the English language media landscape (slightly less of a problem to this day, no thanks to Nielsen but instead to the explosion of media outlets).

In meeting after meeting with Nielsen we told them about the flaws in their system. Incredibly, they acknowledged the obvious shortcomings but said "tough", that's the way it is, it would cost too much money to change. We started the HCTV campaign online and it immediately hit a nerve as I fielded call after call from the press. It was one of the most surprisingly viral efforts I've ever been involved in.

Nielsen's then spokesperson Jack Loftus, instead of answering the charges, came after me personally in the press, despite my best efforts to keep the dialogue tough but civil and professional. In the process Mr. Loftus revealed both Nielsen's and his own apparent ignorance about U.S. Latinos or minorities in general (Nielsen was a fairly lily white company, especially at the top, with the exception of a few token minority positions meant to placate African Americans and Latinos and distract from the bigger issues they had tracking minority viewing).

Loftus claimed we were angry at low ratings for our syndicated shows at American Latino Syndication (my company at the time) and said something along the line of, and I'm paraphrasing only a small bit here "Rose should focus on producing programming ALL Latinos would watch". We answered back that his comments indicated that he and Nielsen believed that Latinos are not made up of diverse individuals, but one monolithic group who only like tacos, mariachi music, soccer and  cheesy novellas.


What Loftus didn't know is that our ratings had exceeded all expectations and we were doing quiet well, in terms of revenue, audience and affiliates. Certainly much better than I had ever expected or planned (a 13x episode commitment on a local cable outlet would go on to air in over 100 markets for over 11 seasons and counting)!

Months later at the NATPE television convention in 2007 where we hired models to circulate flyers wearing "Change The Sample" T-shirts featuring a photo of a young Latina (our office assistant at the time) with tape on her mouth, the icon of the campaign,  Nielsen in a David and Goliath moment for the media history books approached me frantically to beg us to pause the publicity campaign.

They  promised if we let up on Help Change TV! that they would commission an independent research study on this very technical (it's research, it's all technical... and boring inside baseball kind of stuff, one of the reasons Nielsen was able to get away with it in our short attention span media cycles) but nevertheless very important issue and would have official results of that study in six months. They even said they'd share the methodology of the study with us to insure that the process was as transparent as possible. 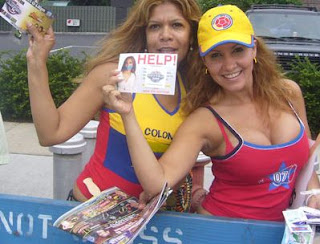 We backed off on the HCTV campaign as promised and waited... and waited.. and waited. Finally after hearing nothing more from them, 7 months later I contacted Nielsen to inquire about the result of the study that they had promised us at the NATPE meeting.

Their reply? "What meeting"?

They denied there ever having been a meeting much less a promise to commission a study despite the fact that there were no less than 3 high level executives from Nielsen in that meeting, the EXACT same executives that were now denying the meeting ever took place. Even after all the things that had come to light about the ugly side of this corporation, I was still shocked. They weren't just denying their promise to do the study, they were straight faced denying that the meeting even took place?!

That was my first lesson in how a multi-billion dollar corporation can simply dance, dodge and delay (and evidently lie) without any moral code of conduct or sense of moral obligation to keep it's word. The experience forever changed how I view research from a research company that an entire industry relied, in which billions of dollars still rely.

Their CEO at the time was Susan Whiting, and in my opinion, though I never met her, she was ultimately responsible (ever heard the saying that a fish stinks from the head down, it's true). The company that she was overseeing had no problem outright disregarding the truth, even though that is what they get paid billions of dollars to objectively try to get at.  How can you trust research results from a company like that?

And how is this for irony? According to Nielsens' website Ms. Whiting was named Chief Diversity Officer in 2010!

My feud with Nielsen ended years ago (visit Help! Change TV to learn more), when I sold my company and felt I had done all I could to represent the case that Latinos needed to be represented in a more positive and accurate light on U.S. English language television  (Spanish TV wasn't much better, it was full of sexism and racism by omission - you could count the number of dark skinned Latinos on Spanish TV on one hand but the girls dancing around in lingerie or thong bikinis during "family hour"? Well, you'd need to use your hands and toes as well of those of your friends and neighbors).  I felt I had successfully brought to light that  Nielsen's erroneous numbers were a big part of the problem.


Things have changed dramatically since Change The Sample / Help! Change TV's heyday in 2005-2007. Nielsen has undergone ownership and leadership changes. There has been an explosion of TV channels, social media is now the norm and Univision has new owners that seem to be a bit more forward thinking. But to my knowledge, Nielsen still hasn't addressed the discrepancy of how it gathers audience measurement for the largest minority in the U.S. (and heavy TV watchers), U.S. Latinos.

And now this news that Nielsen's current CEO is now being accused of knowingly ignoring a major scandal involving alleged bribery in India? Maybe not that much has changed after all.

Indian broadcaster NDTV is suing Nielsen and Kantar Media Research over claims that staff at the firms’ joint venture TAM took bribes in exchange for overstating ratings. According to the suit, this practice has damaged NDTV’s business to the tune of around $810m in the past eight years.


NDTV alleges that staff at TAM India took the bribes in order to falsify the ratings data, and says that at a meeting it attended with several of these field staff, they claimed they could influence what panellist households watched if they were paid between $250 to $500 per household per month.


The TAM staff are alleged to have told NDTV that they were willing to manipulate the ratings for any channel willing to pay the bribe, and added that they were confident that they could triple NDTV’s channel ratings in Mumbai over a period of two to three weeks in the required target group.


‘Nielsen, Kantar and TAM are liable for indulging in corrupt practices by manipulating viewership data in favor of channels that are willing to covertly provide monetary inducements/payments/bribes to TAM officials,’ NDTV says in its 194-page statement.


The broadcaster complains that after making Nielsen’s CEO David Calhoun and Kantar’s CEO Eric Salama aware of the issue, TAM continued to publish data in India. NDTV asked the two firms to discontinue publication of the data until there was an increase in sample size from 8,000 to 30,000, but says that ‘no such remedial measures have been taken’, and ‘corrupt data’ is still being published.


‘Nielsen and Kantar, despite their explicit promises to address such rampant corruption, have negligently, deliberately and wilfully, failed and refused to discontinue publication of corrupted data, failed to increase sample size and failed to increase security measures, all of which they knew they should have done,’ the suit continues.


NDTV is seeking $580m on 42 counts, including negligence, gross negligence, and false representations. A source at Nielsen told DRNO that the firm believes the case is ‘without merit’, while Kantar parent company WPP said that the firm’s lawyers are reviewing the case, adding: ‘We are satisfied that there is no merit in any claim against WPP.’

Posted by DontDragMeDown at 1:06 PM No comments: Links to this post