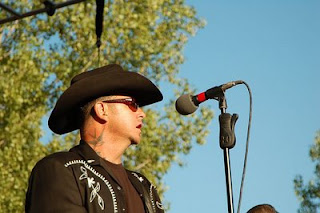 It was hot.. It was dusty... it was inconvenient... It was Hootenanny 2008. In other words it was perfect. Big props to Derek @ Golden Voice for the press passes and KROQ for the All Access Backstage passes. The backstage passes allowed me and my crew (Rich from Black Cat Entertainment, DJ Rockin Vic and his girl Roxy) to eat, drink and most importantly hang out with my idols, the guys from Social Distortion (who are also the guys for Mike Ness, sans Drummer Charlie Quintana).

I could have thumped Mike Ness on the ear (but would have been nuts to do so) as he drove backstage on his Harley. Hung out by his trailer a bit and got some decent views of Mike with his wife and surfer dude kids, a charming looking family and I have to say I’m happy for the guy (and maybe envious?) considering all he’s been through.

Eventually worked up the nerve to say hello to Brent Harding, Social D. bassist and in true form stumbled around verbally like some silly teenager, but he was mad cool... and though I never worked up the nerve to bother Johnny 2 Bags Wickersham, or Mike Ness himself, you could tell they were damn cool dudes... the whole lot of them. Somebody you’d be happy to drink a beer with, laid back dudes and it’s great to see, because I’ve met tons of famous folks via my day job (TV producer) and I could give three shits about 99.9% of them… some are cool and some are not, you just never know. Social D. is different, I’m nuts over the music, their history, the fact that that band single-handedly changed my entire perspective on life and helped me become a successful entrepreneur..

Yes, that is probably unintended but when I listen to Social D, I am indeed, invincible and some little pencil neck lawyer or banker or pussy New York Ivy leaguer media guy has got nothing on me. I’ll put my brain and certainly my ethics up against them all! Yet, I digress, back to the Hootenanny!

Big Sandy came on early and I got to chat with him a little backstage, and Rockabilly legend Glen Glenn came on to a packed crowd and this guy didn’t let the heat get to him one bit!

First time to see Cadilac Tramps and I liked em! they rocked.

Tiger Army’s fans were out in full force as the band had to do a re-start due to “technical difficulties” but once they were on stage they rocked the place. This band is blowing up, but Nick 13 pissed off some fans backstage by refusing photos with them. He seems like an introverted cat but he needs to remember his fans, they are die-hard loyal. I’m sure he does but looks like he might have had better days, not sure what was up. James Meza the drummer was mad cool as always, hanging out with his boys.

Johnny Knoxville made an appearance and the OC girls were off the hook. I live NYC but man; the OC has got a vibe that brings back childhood memories of true California blondes... something I haven’t seen in a long, long time. One hottie at the lemonade stand was NUTS! Wow! Incredible and she likes Social D... I think I’m in love. A hottie that understands me... if only it was reciprocated.

The car show was hot, stopped by some booths and my good friends at SpitFire Interiors and made some new friends at the legendary clothing store Greenspans. Can’t wait to get down there and get hooked up on some real, authentic gear.

A photo of the Hootenanny are on the gallery and on the myspace page so check it out... and video is coming soon. Awesome weekend.. one for the record books, now if only my other problems would go the hell away!
Posted by DontDragMeDown at 10:54 AM No comments: Links to this post 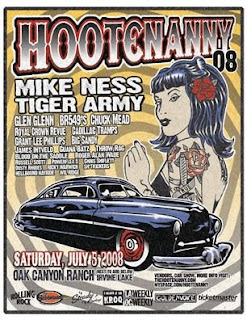 We'll be rocking out with Mike Ness, Tiger Army and the whole gang on July 5th at the annual Hootenanny. Look for us there and for tickets go here:

http://www.ticketmaster.com/event/0900405BCA617490?brand=goldenvoice
Posted by DontDragMeDown at 6:15 PM No comments: Links to this post