Punch Him In the Face!

Punch Him in the Face!

Slick suite and Pretty Lies
Greedy bastard with beady eyes
Sweaty palm and neurotic stare
Punch him in the face! Right there!

Trust no one, your on your own
Come and leave this world alone
And you know life is unfair
So punch him in the face! Right there!

Copyright 2008 Robert G. Rose
Posted by DontDragMeDown at 9:17 AM No comments: Links to this post

NOFX - Are they ever serious? 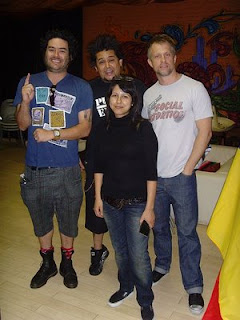 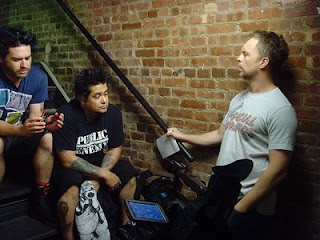 Yeah man... they are. But it sure is hard to conduct an interview with a whoopee cushion going off during or just before every answer. Fat Mike and El Hefe came to our studios EARLY (wow!) for their interview, all hung-over/sleep deprived. Or so they say.

I learned during the interview and afterward at the concert, that not necessarily will you get the straight dope from these guys. They don't give many interviews and I can see why. They looked bored stiff during the entire Q and A and it was the most difficult interview I've ever conducted. If they weren't in their 30s and 40s, someone could use the word brat. So we'll go with surly and mischievous.

I thought I was prepared, thought I was a fan who knew his stuff but obviously not, as one carefully crafted question after another simply met either a response of one word answers in the affirmative or negative, barely audible grunts, eye rolls or "I hate that" or just a pure look of boredom from Fat Mike (El Hefe however seemed quite amused at the Whoopee cushion and my cameraman was having a ball as well, he's Dominican and was like, "these crazy Gringos and their music").

But to be clear, even when he's being an ass, Fat Mike was cool. Mad cool. El Hefe was cool too, just working that Whoopee Cushion like it was a musical instrument (and in his hands, maybe it is).

Yet when I review the tapes, there were will be some gems in there. Like Fat Mike showing me his latest injury, a nasty bruise in the ribs from the previous night's show in Canada. The look of awe when describing the punk scene in Latin America and how they all "stick together" like their lives depend on it, which it does; Or when Fat Mike gets serious for a minute and talks about the state of the music industry and how despite their success these guys STILL don't live like Rock Stars, choosing the Holiday Inn over the latest $500 a night, minimalist design flavor of the year hotel, etc.

They did answer with some enthusiasm about the influence of American Latinos on Punk Music over the years, the difference in the West Coast and East Coast scene, El Hefe's horn work, the influence of Reggae, their admiration of Social Distortion. They would see Social Distortion perform live just when they were at the beginning stages of forming NOFX’s own politically controversial, sometimes just plain amusing sound.

* Hint to all future interviewers of this band. DO NOT rely on the bio posted on their website. Dig deeper. The online web bio is hard to decipher fact from fiction and seems designed to throw people off and most importantly amuse.

All in all, the dudes were gracious with my missteps, let me off the hook a couple of times when I totally goofed a question (I'll admit it, I was nervous, they seemed bored and the interview was a long time coming AND I am a big but relatively new fan of theirs). Fat Mike wasn't vicious when he could have been and corrected me nicely when telling me that "Separate the Church and Skate" was not about Skateboarding at all, but really about how corporate marketers and record labels had created Bubble Gum Punk and kids who were really not fans but liked to dress like punks, etc. etc. All stuff I knew already, but it’s cool to hear him say it on tape.

El Hefe referencing Fat Mike posing as a Jewish-Mexican American Latino the whole interview (I should have known!) later called me out on stage (check the video below) on my gullibility. I wasn't embarrassed but instead shocked to have made an impression. As a matter of fact the whole concert was amusing, they are genuinely very, very funny and intelligent band.

In the end, these guys are big time and I felt it. Yes, they protest like they aren't rock stars and I believe them when they say they stay at Holiday Inns when they travel, but when I congratulated them on selling out Irving Plaza for 3 nights solid, they were like, "dude, that's nothing". And they are right. I was just nervously twittering some stuff to fill their bored silence. These guys have sold 6 million records independently before myspace, itunes, youtube all that stuff made it much easier (or at least possible).

NOFX represents not only good music but the essence of West Coast punk. They struggled to make it against all odds, and made it but stay under their own terms and now are helping others do the same.

These guys have their own record label "Fat Wreck Chords", which has a ton of great punk bands on it (including Dillinger 4 and Flatliners, who opened for them and I'll get to in later posts). They led the anti-Bush movement in 2004, before the incredibly low approval ratings on Bush and the War. And they mix enough influences into their music to make any world music lover proud. They are not your run of the mill band or even punk artists. They are smart, obviously talented and above all funny as hell!

And yet gracious and cool. Even when you’re the butt of the joke, you still feel like, hey man; I could hang with these guys some weekend. Or maybe because they make you the butt of their jokes you feel that way.

But alas, they have sold millions of records, sell out concert halls, even stadiums and tons of merchandise and though Fat Mike says the Record Business sucks now and he DISCOURAGES young bands to get into music, he is very savvy, you can tell.

He did not agree to sign the legal releases before the interview, waiting to see if he liked it first and if the questioning wasn't just too stupid for words. I guess I passed the test as they graciously signed the releases and took photos with me and one of our editors, Angelita, who is a big NOFX fan from her West Coast teen years.

I'll post about the NOFX Show which was awesome as well as the Flatliners and Dillinger Four later on. But for now, let me revel in getting one of the rare TV interviews with one of the most legendary punk bands of all time, bar few. Shit man, I'll be the butt of that joke any day of the week. My ego can take it.


Posted by DontDragMeDown at 8:24 AM No comments: Links to this post